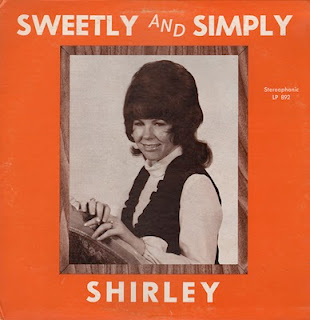 Nobody Like The Lord
Sweetly And Simply
Shirley
21st. Century Christ Ministry
LP 892

From the back cover: Traveling with her husband, W.V. Grant, Jr., she is called in newspapers around the country "America's leading female gospel organist." In the South, people of all races call her "Miss White Soul."

Grant originally operated from a ministry located in Over-The-Rhine, an economically depressed area in Cincinnati, Ohio in the 70s. 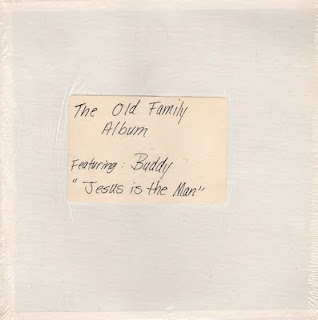 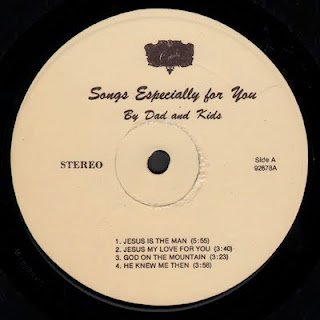 Since I Met The Lord
The Old Family Album
Featuring: Buddy

The record came in a jacket blank with a white hand-written sticker fixed to the acetate.

Record label as seen above is all the info I have to go on.

The surprise is the record features a full blown studio production with a session musicians and back-up vocalists.

I think the sample I posted features "Buddy" singing.
Posted by By Mark Betcher at 5:08 PM No comments: 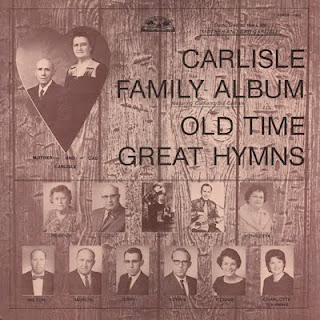 Obscure country gospel album. The only reference to the Carlisle family that I can find online is a German(?) wiki page that features bio material on Cliff Carlisle. I can make out that Cliff was born in 1904 in Taylorsville, Kentucky and passed away in 1983 while living in Lexington, Kentucky. I think the article states that he was a "pionier des Blue Yodeling", or maybe Bluesgrass(?) Yodeling? Anyway, there is no yodeling on this album.

The male vocal you hear on the sample and through out the record must be Cliff's(?). No credit is given to other male or female vocalist(s), but one can assume they are family members.

The jacket also states that the "album was originally recorded for the REM label (a small label located in Lexington, KY) but was never previously released".
Posted by By Mark Betcher at 5:57 AM No comments: 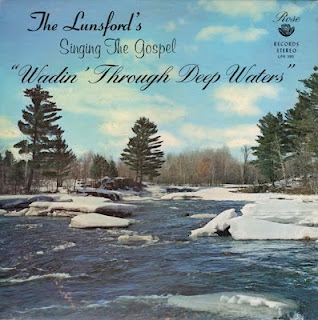 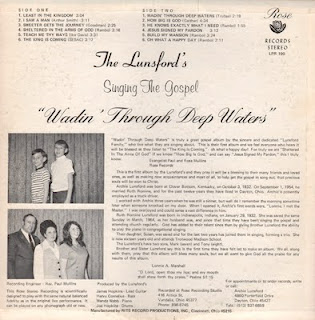 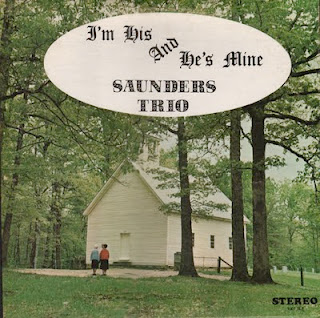 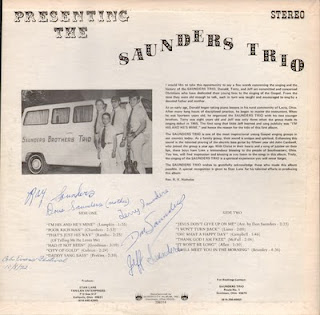 Will Meet You In The Morning
Presenting The Saunders Trio
Queen City Album - Cincinnati, Ohio - 206314

The Saunders worked out of Scottown, Ohio.

This album was autographed, apparently, at the Bob Evans Festival 10/8/72
Posted by By Mark Betcher at 6:40 PM No comments: 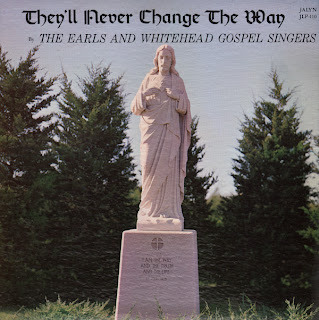 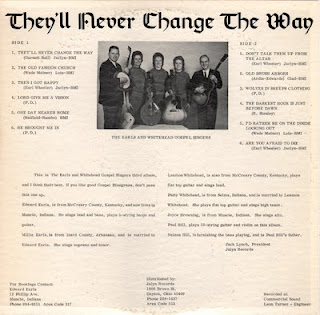 Then I Got Happy
Lord Give Me A Vision
They'll Never Change The Way
The Earls And Whitehead Gospel Singers
Recorded at: Commercial Sound - Leon Turner - Engineer
Distributed by: Jalyn Records - Dayton, Ohio
Manufactured by Rite Records - Cincinnati, Ohio - Rite 448 - 18847

From the back cover: This is The Earls and Whitehead Gospel Singers third album, and I think their best. If you like good Gospel Bluegrass, don't pass this one up.

Edward Earls, is from McCreay County, Kentucky, and now lives in Muncie, Indiana. He sings lead and bass, plays 5-strings banjo and guitar.

Millie Earls, is from Izard County, Arkansas and is married to Edward Earls. She sings soprano and tenor.

Patty Whitehead, is from Selma, Indiana, and is married to Leamon Whitehead. She plays flat top guitar and sings high tenor.

Joyce Browning, is from Muncie, Indiana. She sings alto.

Paul Hill, plays 12-string guitar and violin on this album.

Nelson Hill, is furnishing the bass playing, and is Paul Hill's father.
Posted by By Mark Betcher at 5:58 PM 1 comment:

Enter Into The Joy Of The Lord - The Sacred Bluegrass 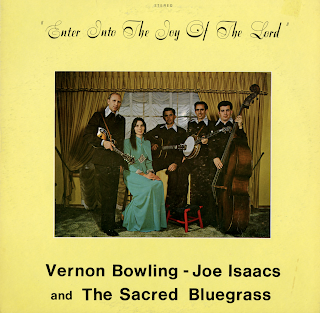 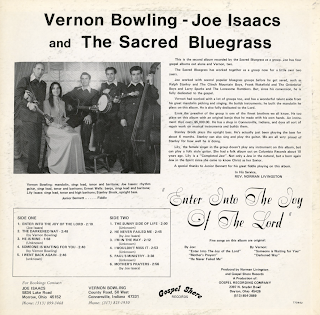 The Darkened Way
Enter Into The Joy Of The Lord
Vernon Bowling and Joe Isaacs
The Sacred Bluegrass
Gospel Shore Records - Dayton, Ohio

Enter Into The Joy Of The Lord
The Darkened Way
He Is Mine
Someone Is Waiting For You
I Went Back Again
The Sunny Side Of Life
He Never Failed Me
I'm In The Way
I Wouldn't Miss It
Paul's Ministry
Mother's Prayers
Posted by By Mark Betcher at 5:50 PM 2 comments: 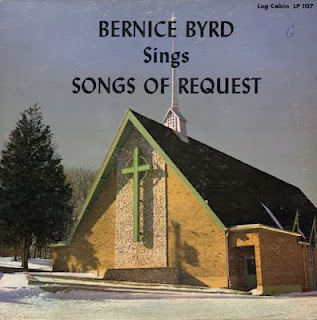 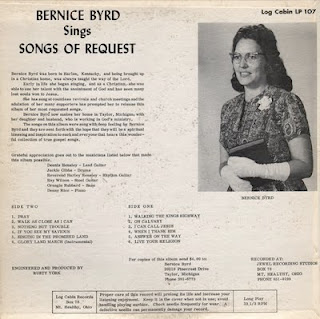 From the back cover: Bernice Byrd was born in Harlan, Kentucky, and being brought up in a Christian home, was always taught the way of the Lord. Bernice Byrd now makes her home in Taylor, Michigan with her daughter and husband.

Engineered and produced by Rusty York.
Posted by By Mark Betcher at 5:05 PM 1 comment:

What Have You Gained - Ernest C. Martin 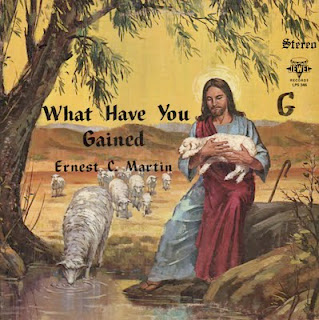 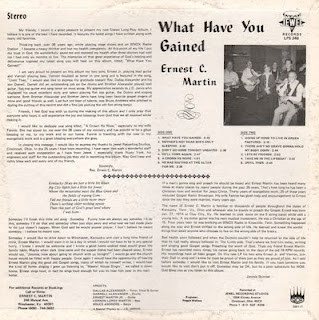 Terrific southern gospel album by Ernest C. Martin who was working, at the time, out of Winchester, Kentucky.

From the back cover: The name of Ernest C. Martin is familiar to thousands of people throughout the states of Kentucky, Tenn., Va., Ohio and wherever else he travels to preach the Gospel. Ernest was born Jan. 27, 1914 at Clay City, Ky. He learned to pick some on the 5 string banjo while still a young boy. A six-dollar guitar was his next musical instrument. He was a Christian at the age of 15. Four years later he was working on WNOX Radio in Knoxville, Tenn. Something happened along the way and Ernest drifted to the wrong side of life. He learned and knew the sordid things that await anyone who chooses to live on the wrong side of the tracks.

In Martins own words, also from the back cover: I became a heavy drinker and lost my health completely. At this point of my life I put my trust in God. He wonderfully saved me and restored my health after three doctors had told me I had only six months to live.

Martin worked with Rusty York, owner/operator of Jewel and had thanked him and the staff for the "outstanding job they did in recording this album".

Ernest Jr. and Vernon are Marin's sons. Martin dedicates the track A Crown He Wore to his wife, Fannie.
Posted by By Mark Betcher at 8:05 AM 2 comments: