Going Up Home To Live In Green Pastures - Denzil Hunt 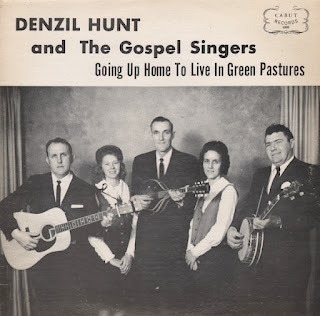 From the back cover: Denzil Hunt is playing lead guitar and singing lead on this album. His wife, Elsie, sings low tenor. Henry O. (Hank) Pelfrey plays the mandolin and sings bass. His wife, Grace, sings high tenor. They are accompanied by Wilburn McClury on the five string banjo. Edsel Goble is playing rhythm guitar and Herman Bowen is on the bass.

The musicians hail from West Liberty, Morehead, Soldier, Wolfe, Farmers, Tomahawk and Hode, Kentucky.
Posted by By Mark Betcher at 5:44 AM