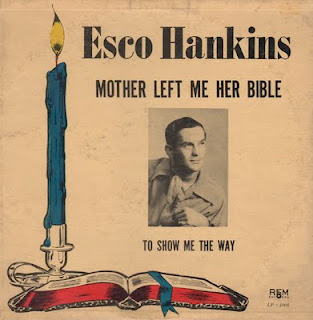 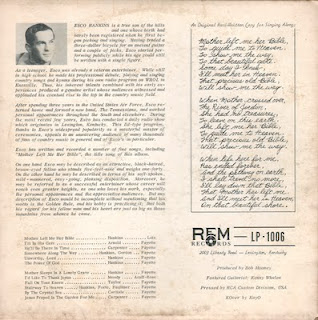 Stairway To Heaven
Mother Left Me Her Bible To Show Me The Way
Esco Hankins
REM Records - Lexington, Ky - LP 1006

This is a local record for me (living in Northern Kentucky as I do). Hankins also recorded for Rusty York/Jewel in Cincinnati, Ohio. Hankins wife, Jackie did backing vocals on this album.

From the back cover: On one hand Esco may be described as an attractive, black-haired, brown-eyed fellow who stands five-feet-nine and weighs one-forty. On the other hand he may be described in terms of his soft-spoken, mild-mannered, easy-going, pleasing disposition.

From a bio found on jukkajoutsi.com: The year 1963 saw Esco and his wife Jackie recording for Bob Mooney’s Rem Record label of Lexington, Kentucky. His initial release for the label was a 6 track EP album which contained the following recordings MOTHER LEFT ME HER BIBLE, MOTHER SLEEPS IN A LONELY GRAVE, JESUS PRAYED IN THE GARDEN FOR ME (these three recordings can also be found on (Rem RL-1006 “MOTHER LEFT ME HER BIBLE TO SHOW ME THE WAY”) released in 1963 and which was also re-released on (Old Homestead OHCS-309) with the same title and which was released in 1984. The other tracks on the EP are LIES AND ALIBIS, WITHOUT YOU and THAT’S IT (EP-504). He also recorded I’M IN HIS CARE, HE’LL BE THERE IN TIME, SOMEWHERE ALONG THE WAY, UNWORTHY LORD, THE POWER OF GOD, I’D LIKE TO THANK JESUS, FALL ON YOUR KNEES, STAIRWAY TO HEAVEN and BY THE CRYSTAL SEA. He also joined the WWVA Wheeling Jamboree during the year.

Hankins made his home at the end of his recording career in Lexington, KY. He worked as a deejay at various radio stations, operated his own music shop, The Esco Hankins Record Center and performer locally on Lexington's weekly gospel music program, The Revival Tabernacle.
Posted by By Mark Betcher at 8:09 PM